This huge seed-shaped sculpture, created by Peter Randall-Page, sits in a specially designed chamber at the heart of the Core building.

In 2003 artist Peter Randall-Page was commissioned to collaborate with Jolyon Brewis of Grimshaw Architects on the design of a new education building for the Eden. The result is a building whose roof structure is based on the geometric principles underlying plant growth.

At the centre of the building is a specially designed chamber housing ‘Seed’, Randall-Page’s enormous granite sculpture based on the same spiral phyllotaxis pattern as the structure itself.

This pattern relates to the Fibonacci sequence and the golden proportion and can be seen in pinecones and sunflower heads amongst many other botanical examples.

This monumental granite sculpture is constructed from a single piece of Cornish Granite, originally weighing over 167 tonnes, and took almost four years to complete.

Its surface is carved with nearly 2,000 ‘nodes’. The spiral pattern on which the sculpture is based bears no relation to a horizontal and vertical grid, which made the task particularly complex, involving as it did a balance between geometric accuracy and organic freedom.

In the manner of Rothko, who stipulated the dimensions and light conditions of the rooms in which his work should be seen, the chamber and artwork were conceived as one. Peter wanted to separate this inner sanctum from the bustle outside to give the chamber a meditative and contemplative quality.

‘Seed’ is lit by the natural daylight filtering down through the central aperture. The changing weather and seasons play across the sculpture’s undulating, tactile surface.

Artist Peter Randall-Page was born in the UK in 1954 and studied sculpture at Bath Academy of Art from 1973–1977. During the past 40 years he has gained an international reputation through his sculpture, drawings and prints. 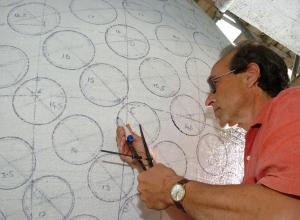 He has undertaken numerous large-scale commissions and exhibited widely. His work is held in public and private collections throughout the world including Japan, South Korea, Australia, USA, Turkey, Eire, Germany and the Netherlands. His public sculptures can be found in many locations throughout the UK including London, Edinburgh, Manchester, Bristol, Oxford and Cambridge and his work is in the permanent collections of the Tate Gallery and the British Museum amongst others. In 2015 Peter was elected as a Royal Academician in the category of sculpture.

His practice has always been informed and inspired by the study of natural phenomena and its subjective impact on our emotions. In recent years his work has become increasingly concerned with the underlying principles determining growth and the forms it produces.

In his words, ‘geometry is the theme on which nature plays her infinite variations and can be seen as a kind of pattern book on which the most complex and sophisticated structures are based.’

Discover the art of Eden

This artwork is part of the Invisible Worlds exhibition, supported by the Wellcome Trust, Arts Council England, and the Wolfson Foundation.

Find out more about art at the Eden Project

Explore the 30-acres of the Eden Project whilst viewing a range of works from grass-root and world-renowned national and international artists.
Explore our collection

See our artworks free as a Member

Becoming an Eden Project member will give you access to unlimited free entry, priority booking for popular events, 10% off in our shops, restaurants and cafes and so much more.
Join as a Member

Explore the world beyond our senses in this major permanent exhibition in our Core building.

Discover works from a diversity of grass-root and world-renowned artists across Eden’s 30-acre site.